Montana Jones story was originally publlished in the Autumn issue of Watershed Magazine. 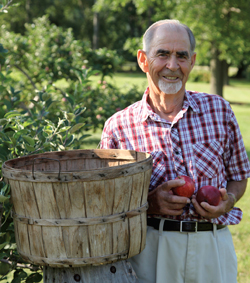 Austin Thomas has the face of nature. His light, almost elfin spirit skips out with every easy grin as he talks about one of his true loves—the apple. The ageless arrangement of lines on his smiling cheeks have been burnished by breeze, etched under sun and smoothed over time, much like his grove of leafy friends rooted out back behind his Grafton home.

In our quest to measure success we so often use numbers to define, to quantify…we count the days, the degrees of weather and the hours in a day. Not so with the sentient steward of the orchard.

Austin has a feel for apples, an immeasurable affinity that doesn’t require endless calculations. His approach is to touch…to watch…to listen in the orchard. He’s spent a fair bit of his 84 years just being with trees.

This man who has nurtured apple trees along for the past 48 years has earned a sort of local celebrity as a grower of some of the finest tasting apples around. “Apple Thomas”, as he is often called, just knows his apples.

His well-known Thomas Orchard on County Road #2 was a 12-acre apple orchard, with 40 trees to the acre. “Just enough one person could pretty well manage except for picking time and I’d get help then,” says Austin.

“I knew nothing about apples when I started there in 1963. I just began studying them, and I had a very good neighbour who taught me a few things. “I was raised on a farm north of Oshawa in Blackwater…always liked gardening and horticulture, but I hadn’t grown apples. My father had a lot of apples planted too but they weren’t popular varieties. I don’t think he had a single one that was commercially popular at the time. They were Northern Spy, Macintosh, Ben Davis and Starks.”

After searching across Ontario for a suitable property, he knew the moment he saw the farm that it was ‘the one’. “As soon as we moved there, I pruned down most of the beautiful Macs and grafted other varieties…the old fellow I bought the apple orchard from was mortified! Best tree in the orchard, he kept saying, best tree in the orchard, now it’ll never bear in your lifetime!”

“I grafted one completely to Snow apples and I don’t know how many to Russet. If you graft, rather than plant a tree and wait five years, you have apples in the third year. First year shoot, second year fruit buds, third year apples.”

“Five or six years later he says, “You know I didn’t believe in what you did when you came here but you did everything just right didn’t you?”, Austin recalls as the elf grin returns.

“I knew if I grew good apples the customers would come to me. You don’t have to take them and peddle them around. I think I had maybe eight of each variety, and that’s all I could sell at the road.”

He sold Thomas Orchards 26 years ago, and moved over a little west to where he now still fosters his own backyard bounty of fruit. “I have seventeen varieties here grafted onto nine trees—Mac, Northern Spy, Wealthy, Stark, Milwaukee, Gala , Honey Crisp, Red

Delicious, Golden Delicious, Empire, Russet, Paula Red, Snow, Transparent (aka Golden Harvest), Tolman Sweet, McCoon, Red Melba and a mystery apple from my friend Joe Melseck. A taste of this and a taste of that. The idea is that I have them at their proper picking time.”

“The ones found in the stores are picked too early. The flavour is not there. When the Macintosh are picked, it’s far too soon, as early as the 15th of September, when the starch is very high in them, so they put them in a controlled atmosphere. By the time the Macs are actually ripe, proper to eat…they’re on to something else.
“The Macintosh is only a fall apple and commercial growers are trying to extend it to April and May.  The fact is a Mac has one good month of life, to me it starts around the 25th of September and runs through to the 24th of October. Then you should be eating something else.”

Since 1968 Austin has kept a journal of his life with apples. He can tell you which day you should be picking a particular variety of apple to enjoy it at it’s peak of taste. That book of musings may be the reason Thomas Orchard developed a reputation for having the finest, most flavourful apples around. “People came for miles for our apples—from Toronto on weekends, Ukrainians from the lake, a Pentacostal camp nearby, vacationers en route through Northumberland.  On Sunday afternoon my late wife Elizabeth, my son and daughter and I had 105 bushels out all over the yard.”

He remembers, “You couldn’t get in from 2 till about 5 o’clock. The whole yard, the storage, piled with ready apples. When the onslaught came, we were ready.  We had about 10,000 bushels, so we did sell commercially as well to a wholesaler in Toronto as well as the weekend roadside sales.”

How to grow an apple:  Preferring quality over quantity, Austin thins out about 70% of the apples as they grow. He removes those on the underside of the limbs because there is no sun down there. “It gets red from the sun but not sweet from the sun,” he explains. “It becomes sweet because of the leaves around the apple, they put sugar into the fruit.  So underneath, the apple doesn’t get red and the leaves don’t get any sun to build the sugars and starches to put a good shelf life into that apple.”

Some growers will lay reflectors down on the ground underneath the tree to reflect light up on the underside of the tree, so its red all around. He removes extra apples so that each remaining one is bathed in ripening sunlight, keeping each fruit no less than nine inches apart, and also does summer pruning on the suckers that shoot straight up.

Northumberland’s iconic apple man offers a simple suggestion, one that aptly applies to so many more circumstances in life’s orchard. “The most important note to enjoying the perfect apple,” Austin feels, “Is remembering that to every thing there is a season.” His pupils grow large as apples in the centre of his sparkling eyes. “You just let them hang on the tree until their time, ‘till they snap off easy because they’re so sweet and full. It’s about when. You wait for that right moment in nature.”