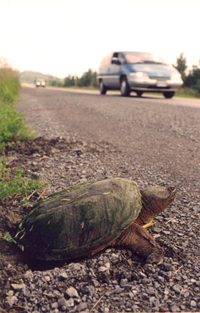 I am driving home, rolling west toward Hastings along the dips and curves of Highway #7, it’s late afternoon and the sun is angled low, throwing muted shadows that turn the paved road a dusky purple, and the trees on the horizon a sure steel blue.

Up ahead, small lumps appear in the road and I instantly slow and veer off to the shoulder and turn off the engine. This is my fifth veer this week. I always hope they are only broken hunks of rock, fallen from the steep granite walls that escort this road as it carves through blasted Canadian Shield. Too often, the pieces are not the grey-green streaks of shattered bedrock, but of shattered turtle.

I jump out and hurry over to see stillness crushed into the gravel. The mossy shell is cracked fully open, and the yellow plastron underneath is split in half, internal organs crushed. The only movement is an opaque balloon-like lung wavering in the wind, like a small pleading white flag, surrendering too late.

The way my chest constricts at this sight, it might as well be my heart lying out broken on the pavement. I can’t help it – I’m a turtle lover. Something about those artful reticulated orangey lines, the tactile wonder of the smooth under and the domed over. Turtles are so earnest. Seems such a tremendous amount of effort on their part to form not only leathery tail and needle claws, but a solid armoured shell and rubbery breastplate too. Those soft folds of pale yellow skin, just inside where their little turtle underarms meet the elusive body that disappears under that helmet exterior. They are the perfect sculpture…so many textures, so much detail, so much creativity in their very existence. The eyes blink back Zen-like, the knowledge of Ancients behind those tiny dinosaur lids.

Their very form is yet another example of their nature – persistence personified. It seems the least we can do as humans is make the effort to drive around them. All those years of forming, hardening, crawling to wherever it is turtles go, and whuuump…one tire and it’s all over.

Last week travelling the same road I spotted a hump ahead and did my usual veer off. I was excited. The moving contour was alive and well and intent on reaching the other side of the busy road, but had only made it as far as the middle yellow line. Cars were speeding by in both directions so I waited for a break in the traffic, ran out and scooped up the round little reptile. It was a Midland Painted Turtle, about 6 inches long, and he proceeded to pee all over my hand in defence. I knew it was a he because the males are gently concave underneath; the females flat.

This turtle was a work of art, with thin yellow lines and flashes of red embroidered throughout his deep green lacy skin. I gave him a lift to the other side and planted him farther down near the edge of the marsh, away from the road. My mission was complete, my turtle heart happy.

The first turtle I heroically saved may still be cursing me. It was a Snapping Turtle, also roadside. I knew enough from my childhood days of swimming gingerly in country ponds, that they were to be treated differently. Snappers could not be whisked up so casually. Snappers do not take kindly to much else in the world except other Snappers, and can inflict a fair bit of pain with those sharp, beak-like mouths. Hence their name.

I decided I wouldn’t need a stick to gently prod her away from danger. The toe of my sneaker could withstand a fair bite if this one chose to act out its name.  This dim creature had climbed the steep embankment from its safe marsh home all the way up to play highway roulette. It must have taken the entire day to get to the top.

The important thing was to get her quickly off the road before the next onslaught of cars. I nudged once, twice, three times and over she toppled, tumbling end over end, somersaulting down the hill till she splashed into the shallow water at the bottom. I was mortified. I had thought she would just kind of head in that general direction after one harmless little rollover. I swear.

At least she had a shell, I reasoned, and the grass was long, soft and a good cushion. She would be okay. I looked quickly around to see if any passers-by had witnessed this act of apparently ruthless turtle–bashing. At least I’d prevented another turtle from dissolving into mashed reptile. I had done a good thing.

Looking down by my feet there was a hole in the dirt that she must have been covering. Sheepishly I realized it was actually a very clever turtle and she’d climbed her Mount Everest with the sole purpose of continuing her species. That hole was for a clutch of eggs. I felt like a moron. I looked over to where the trooper had landed and she was already plodding up the hill toward me, back to her chosen spot.

I secretly hope all of this turtle saving has since redeemed me in the turtle world. Perhaps somehow, news of my good deeds has reached that dizzy object of my first misguided attempt at compassion.

Now, looking at the flattened leathery mound, there was little I could do except push it further off the road to prevent the crows that would soon be pecking it from meeting the same fate. Before getting back into my truck, I notice another dome a few hundred feet up by the roadside.

I walk over to find a 14-inch Snapper, with bits of duckweed clinging to its still moist back. This one does not hiss at me as I near, just stares straight ahead, unmoved and unmoving. The rear foot is plunged down a gravely dirt hole, like a car tilted askew with one tire in the ditch. I realize it’s a female, so I kneel and watch. A steady stream of cars whiz by, not two feet away, rocking us with each pass.

She is single-minded, concentrating, and neither my presence nor the dangerous autobahn alters her focus. The surrounding earth is moist where she urinated to make the hole digging easier. She quavers, pushes out a small round egg, and flips her leg a few more times to sprinkle earth. The hole is filled with what looks like a stash of perfect round little ping-pong balls.

I wait with her, until her last egg is laid, and she carefully covers them up with the remaining dirt. She looks straight at me for the first time, but still does not hiss or snap despite my close proximity. She turns away from the road, and plods slowly down the embankment and slips into the shallow water.

By September this road will be alive with twenty to forty scurrying baby snappers fleeing for their lives. I only hope they will head for the cover of tall marsh grass instead of the deceptive cover of fly-by automobiles.

I head back to my vehicle as another truck pulls off the road. It is my neighbour, kindly stopping to see if I am having car trouble. I thank him for asking and explain that I was rescuing turtles. His face contorts.

“Turtles?” he says in disbelief, “What for? There are too many of them already!” he shouts as he drives away.

This mindset may be the reason so many crushed, lifeless shells bearing tread marks are sprinkled along our summer roads. A startling number of turtles are found well over to the shoulder, with tire tracks extending to and away from them in the soft dirt, evidence that their destroyers had to purposely drive off the road to hit the intended targets.

Back enroute, two mourning doves are directly in my truck’s path. They have landed beside the carcass, perhaps to coo plaintively over the inequitable end to another creature’s life. With a wingbeat, they lift up the twiggy soles of their little bird feet and fly away.

Our turtles are not so lithe. They seem to haul their thousand years history with them, forging on in small steps, in steady bits of time, oblivious to the impending doom of our careless wheels. They may each carry a miniature fortress, but they still need the gentle hand of we human giants to really protect them.

That is, if we are indeed big enough to save them.